is a hateful scream…

Only silent silence, silencing away

Do not believe for one minute

Silence, when voices are needed

as desperately as air to breath

is no longer acceptable

…not that it ever was.

Do we acknowledge inequalities, the harm and madness caused by these in the flesh, and work to address them? Or do we listen to and believe some politicians whom, as well as being grossly overpaid for not delivering improvements in people’s lives, believe and tell us too that ‘disadvantaged’ people have a low IQ and this is why they are poor?(i) If the first, what kind of humanity are we colluding with that allows the second to be in charge of decisions which intensify harm to the most discriminated people in our society? Questions like these multiply in my mind at every turn, as I witness and experience inequalities galore. Inequality increase must have been this government’s new year resolution, and the previous year, and the previous and so on.

Incongruence reigns supreme. Did someone change the meaning of justice whilst I was sleeping? The minister responsible for designing and implementing the new ‘social welfare’ system and the ruthless cuts it has brought about over the last few years also heads a place that deceitfully says to be for social justice, an “independent think tank” (and we know that tanks don’t think) to tackle “the poverty that blights Britain”. They reckon there are five paths to poverty, none of which relate to inequality, or structural barriers that impede access to resources, to knowledge, or an end to discrimination. Whilst they create overwhelming misery to disabled people by questioning their impairments, disbelieving them and withdrawing or severely reducing benefits, the very same government fought the European Union for bankers’ rights to pay obscene bonuses to their directors and top managers.

Meet Maruja, from Peru. She was diagnosed with Parkinson’s disease three years before we met, her life was turned upside down, and that is an understatement, after decades of working and making contributions in her adoptive country. She received a community care assessment confirming her eligibility for social care and, after months of what can only be called a labyrinthine journey, even with support from advocates, she got a direct payment to pay for support. Her needs were high and the agreed budget left her alone for hours with many of her needs unmet. No one would expect not to be able to go to the toilet when the need arises. Yet she, and many others, are left for hours on end until the next scheduled assistant arrives.

Maruja also lost her speech. Though the impact of this loss to her was immense, it was lost on most professionals whom she felt regarded her as an object of their work whilst ignoring that not being able to speak did not equal having nothing to say. “This could be you, your sweetheart, your child, one of your parents”, she typed on her laptop, positioned on an adapted tray in front of her chair, hitting one character every few seconds, as her fingers travelled across the keyboard with both great difficulty and painstaking determination. Our conversations were aided by this inadequate method, body language, facial expression, patience on both parts, empathy and time. What communication can be allowed when time is calculated by faceless bureaucrats who control the purse strings with no understanding of how things happen, or the need for human communication and connection before, during and after any support occurs? Undoubtedly, social care staff are under a lot of pressure, with caseloads reaching unrealistic levels and deserve our sympathy, for the most important job on the land, to support another human being to live a dignified life, getting among the lowest wages in the country in return. However, for people who need support, including sympathy and, dare I say empathy, support staff are the visible face of an otherwise faceless system or institution.

Maruja was adamant: “social care staff and managers should be injected with an empathy serum on day one to keep disabled people safe from discrimination. I was treated with disbelief in what I was able to do, even though I cannot move by myself nor reach out for anything beyond two inches away. They would not wait for me to say anything, just walked their talk over me with no consideration for my views. Person centred? They are full of words, no action. Independent living has been sabotaged”.

Maruja had been waiting for two years for an electronic aid to assist her communication more effectively than with the A4 laminated alphabet grid given to her by her speech and language therapist. It lives in between the arm of her chair, where she spends most of her time, and the floor, rarely within reach. Her frustration is apparent and shows in her painfully desolate glance. After each review, months would pass without responses to her concerns. The last social worker said she should get a Continuing Healthcare assessment to ensure her needs were met adequately. Although, once triggered, such assessment should produce an outcome within 28 days, again months passed by without a response, in spite of repeated calls by her advocates. She said she felt abandoned and dismissed.

Pressures on social workers are undeniable. However, where most people probably went into the profession with honourable intentions to assist others with the support they need, unfortunately, many have become, by design, the gatekeepers for the funding. Numerous social workers have said to me, ‘off the record’ that their position is impossible, not only due to the sheer weight of caseload, but their ability to gain support to meet the needs of clients. Many become desensitised to the poor conditions their clients face, and a considerable number leave the profession disheartened. The pressures are well documented(ii).

With a friend’s assistance, Maruja was able to borrow a Lightwriter, a speech enabling communication aid, for two weeks. She learned to use it very quickly and made a huge difference to her communication in general, and with her paid carers in particular. One of the most upsetting things for Maruja was the lack of consultation on the part of assistants, who would make their own guesses regarding her needs thus depriving her of being in charge of her life and of making any meaningful choices to do so.

The speech and language therapist promised numerous times to ‘look into’ getting funding for the communication aid. To no avail. The various social workers which reviewed her support plan also promised to get onto it and to discuss with their managers Maruja’s unmet needs. Also, to no avail, in spite of assistance from advocates.

Seeing this really strong woman’s unstoppable tears pour down her face in frustration and desolation at what life had become for her should be enough, though unnecessary, for any professional to fulfil their responsibility in ensuring that the support she received was person-centred, with her communication needs at the top of the agenda. How can you support anyone if you cannot communicate with them? A question I keep on repeating in many spheres. Most people I encounter agree that this would be difficult if not impossible. Yet unmet communication needs fall into a void of despair for the individual with no speech and for anyone trying to help.

What kind of society has been created and keeps on being sustained that accepts this state of affairs?

A single bonus of, say half a million pounds, would pay for 125 electronic, easy to use voice enabled communication aids, or even for 1,250 tablets equipped with simple but effective touch-screen grids to enable communication. Just imagine the upward leap in quality of life for each person.

I am really sorry to say that Maruja died two years ago. I am also outraged. Her communication aid never arrived, was never arranged, two years on from having borrowed one that worked well for her and could have massively improved her quality of life. Her Continuing Healthcare assessment process was never completed. Her social care ‘person-centred’ plan was never approved. This is a never, never, never intolerable tragedy.

The UK is a signatory of the United Nations Convention on the Rights of Persons with Disabilities. They conducted an inquiry last year on UK compliance with the Convention, where they criticised the UK Government for failing to uphold the rights of disabled people through a string of austerity policies, which they considered had a ‘catastrophic’ impact on their lives(iii). The Government is in denial, despite the robust evidence that cuts to health and social care are likely to be the main cause of 30,000 excess deaths in England and Wales in 2015, and nearly 120,000 excess deaths in England.(iv)

I trust you too are disappointed and outraged reading this. We should be. There are many people in Maruja’s situation as I write this, and the silence is unbearable. Let us break this silence and define our humanity. 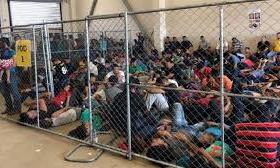